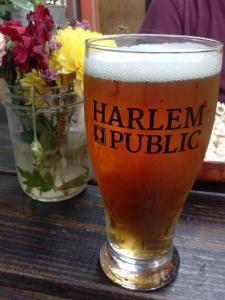 The construction of Harlem Public was just being finished in the summer of 2012 when I moved into my first New York City apartment. As a new local I eagerly awaited the launch of what appeared to be the first cool looking bar on Broadway north of 145th St. By “cool” I mean a modern, warmly decorated watering hole appealing to a mid twenties – mid thirties, more professional crowd; people who knew that life was work but if you did it right the rewards far outweighed the constant effort you put into making a sustainable yet fun life for yourself. And on days when that was forgotten, the kind of crowd that could bond in the amicable silence and physical proximity of other hard working, soul searching individuals. I was not the only one waiting for this with baited breath. From opening day in September of 2012, Harlem Public saw an endless stream of charismatic, attractive individuals flock to their doors to schmooze, dine, and relax with one another. A veritable bar owners dream I can imagine but then again, these owners clearly had a plan, successfully reaching their target audience and then some.

I was ecstatic to have such a gem available in a neighborhood that was a bit intimidating in which to create a new home. Easier access to peers and hopeful contacts provided an attainable goal in building a new social network. While I can’t say that this bar was pivotal in my freshly formed relationships, it was definitely a steady source of conversations, plans, and dates of both the platonic and romantic variety. Plus they have amazing food. At times I think of Harlem Public as a restaurant first and a bar second, although their extensive drink menu quickly reinstates it’s libationary status. Today was my first time enjoying brunch there (official brunch menu offered Sundays only), a breakfast burger loaded with bacon, fried egg, and tater tots washed down with a glass of summery Kuka Ginger Mango IPA. See mouthwatering images below. 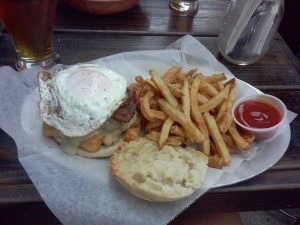 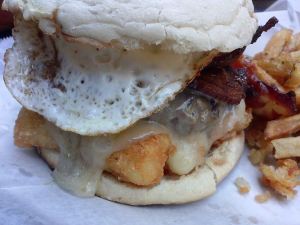 Other personal recommendations include the Apricot Wheat Chicken Wings, BBQ Burger, Parmesan Crusted Burger, and Pulled Pork Mac & Steez. Clearly I’m a meat and potatoes girl so I haven’t tried many of their more vegetable induced concoctions but I can say that the fried pickles are a zesty treat. My go to cocktail is The Adalyn, a refreshing mix of gin and herbs resembling a garden in a glass, with a sprig of rosemary lightly tickling my nose at every sip. With the ever rotating draft selection I usually enjoy a different beer every time I order one. So if you somehow haven’t visited Harlem Public, take the walk or the ride on the 1 train and head over. I might see you there.

2 thoughts on “Harlem Public: Leader of the Pack”